By Michael de Silva @bsodmike Dec 4, 2022, 12:00am UTC
Electronics, PCBs, LED Driver
Having received the previously designed low-side LED driver PCBs, it was time to perform some initial functional tests.  The usual process here is to check for potential shorts and waveforms on the board, essentially checking components/stages 'block' by block.
The initial setup took some time as I not only had to solder the PTH components (Plated-through hole) such as the jumper headers but also various power, test and output leads as well. Ideally I would have not used my DC electronic load for initial testing but I sadly ran out of high-wattage wirewound resistors on hand. 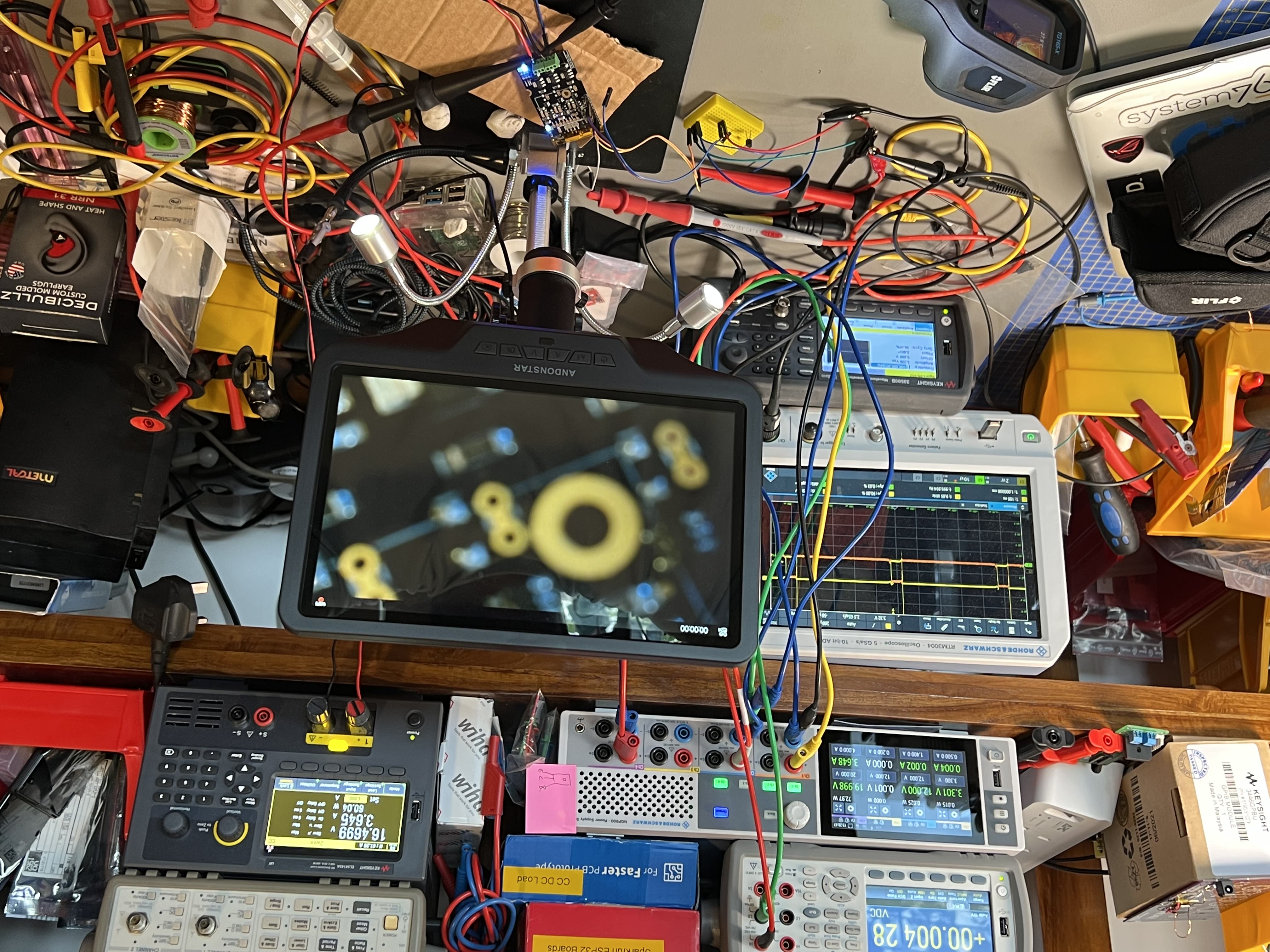 Top left: (i) very top: Bench DMM (ii) below the DMM: R&S Power supply (iii) R&S Oscilloscope (iv) bottom: Keysight Arb. waveform generator (v) top-right: Keysight DC Electronic load
Referring to the schematic the intended microcontroller input of 3.3vdc is passed through an inverting buffer and the input to the Darlington driver is translated to 12vdc via the npn BJT.  Therefore the input PWM signal into the gate of the MOSFET is also 12vdc.  However, remember that the MOSFET is "sinking" the current from the load, so due to this final inversion, if the microcontroller PWM is at a duty-cycle of 90%, this is reflected at the load (input of 90% is inverted to 10%; applied to the MOSFET gate, 10% duty-cycle means 90% is sinking current, hence it operates at a 90% duty-cycle effectively). 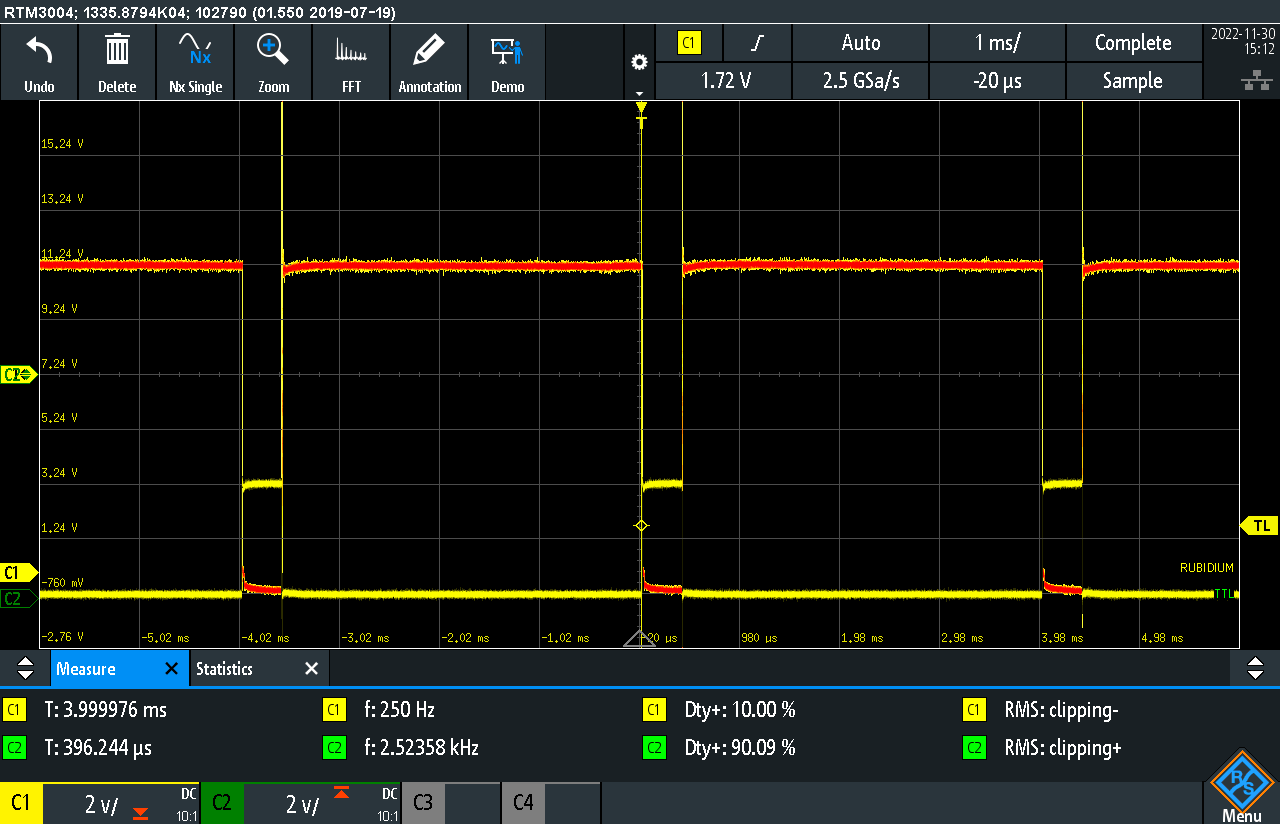 250Hz input at 10% duty-cycle (C1/in Yellow), which applies 90% at the load (in fire-red).  Ignore the incorrect stats on C2, as I had zoomed in too much for this.  Notice the R&S scope indicates both channels are being clipped by the orange markers in the footer.
My intention is to run this driver at 1kHz; notice the plot below has the input at 90% duty-cycle, causing the trace in red to reflect 90% duty-cycle as "sinking" at the load end. 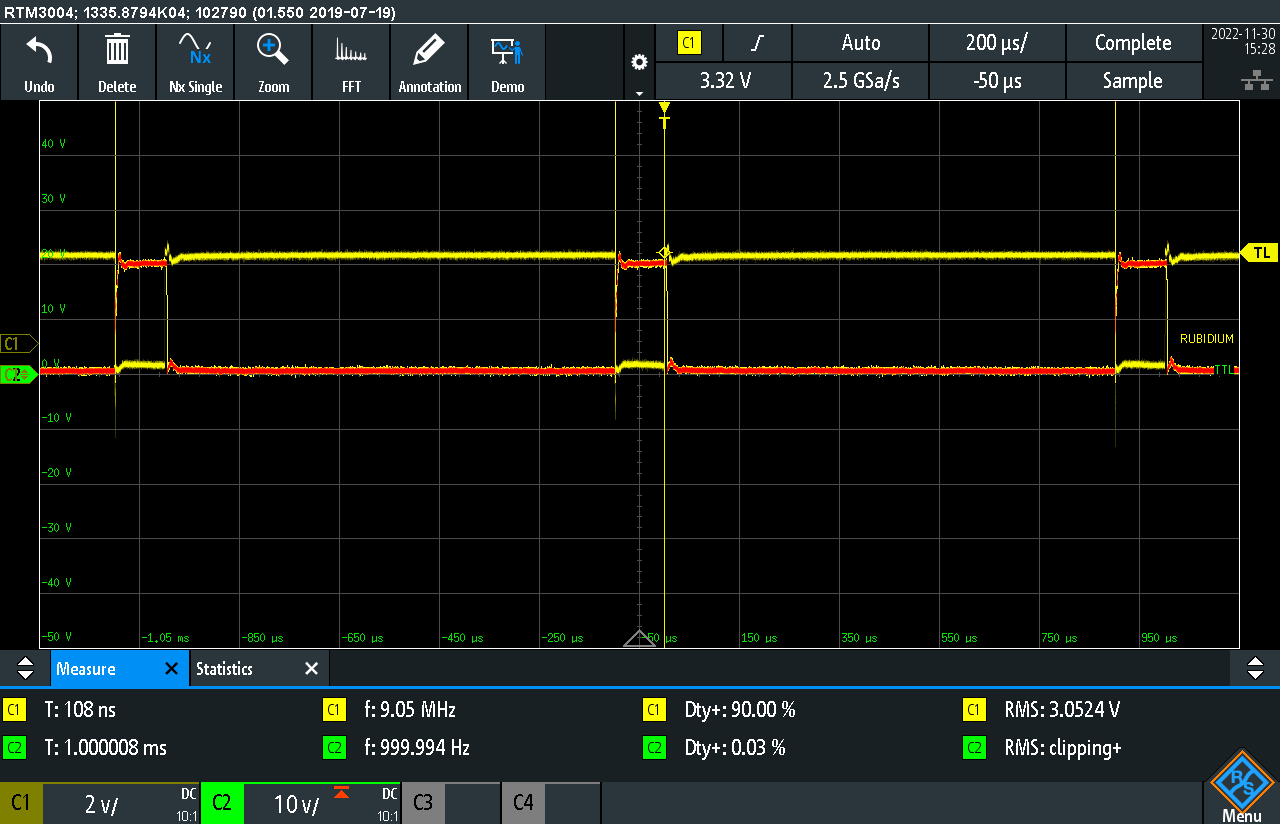 My initial testing pushed 24VDC @ 4A and the MOSFET was imperceptibly warm to the touch.  Suffice to say, this was being switched quite nicely, although I did make one obvious mistake on this batch of boards where R14 (and its equivalent on the other two-drivers) needs to be 10K instead of 100K.  The slow rise-time in the PWM signal above could be due to this very-weak pull up.
Since I'm only powering a resistive load, I think I should be able to get away with this set of boards, but I will of course first test with a light strip.

Testing with a Lightstrip